Seward Co-op opened its doors on a dreary winter day in 1972, during a time when food prices were sky-rocketing, faith in government was at a low point, and civil rights issues were at the forefront of evolving social movements. The world seemed increasingly fragile, alienating, and volatile, and people responded by participating in grassroots organizing to build a better world. They believed it was time for a system that valued transparency over secrecy, one that promoted fairness over abuse of power.

Seward Co-op’s first building was located at the corner of 22nd and Franklin Avenues as a storefront of less than 700 square feet, and it was run by volunteers. When the opportunity arose to use that building, organizers hit the streets, petitioning community members to join an effort to start the co-op and raise money to purchase the initial inventory. Most of the food was sold from large buckets and bags sitting on the floor.

Fifty years later, our product selection and merchandising techniques look pretty different, but the need for cooperative organizing is stronger than ever.

Starting a food co-op in 1972 was an extension of an anti-establishment ethos that encompassed the environmental, civil rights, urban renewal, and anti-war movements of the time. The idea behind the food co-op was to provide an antidote to corporate capitalism, to create a place where an alternative economic order could flourish, and the average person would have a voice.

As we begin a year of celebrating our 50th anniversary as a co-op, we continue to reflect on who we are as part of a broader cooperative movement working for justice and the abolition of oppressive systems. In 2022, enjoy this series of events and discussions about our own evolution as a co-op—and what we want Seward Community Co-op to be 50 years in the future.

Join us for a virtual presentation of Seward Co-op’s 51st Annual Owner Meeting. Help us celebrate the power of cooperation and community as we conclude a memorable year of honoring our 50th anniversary!

Gather for one last toast to our 50th anniversary as we debut a new video celebrating Seward Co-op’s history and community impact. We will also share the results of the board of directors election and announce the SEED recipients for 2023, including the results of our annual Community Choice SEED vote!

Seward Co-op’s 50th annual owner meeting was held on Oct. 26, 2021. Dr. Jessica Gordon Nembhard (she/her) joined Seward Co-op Board of Directors President, LaDonna Sanders Redmond (she/they/iya), in conversation about how co-ops can be a manifestation of abolition. Miss out on the live virtual event? We’ve got you covered with a recording in both English and Spanish for your viewing pleasure.

On Thursday, Jan. 13, in celebration of our 50th anniversary, Seward Co-op hosted a virtual panel discussion about the original documentary film “The Co-op Wars”. We were joined by Erik Esse and Deacon Warner, producer and director, and also welcomed early co-op movement leaders Lori Zuidema, Gary Cunningham and Leo Cashman. Read more about the discussion here, and watch the recording here.

It was a blustery day on April 23 for the return of our in-person CSA Fair at the Creamery building. Nearly 30 local farmers showed up to visit with community members about CSAs and to share the importance of working together to build a strong local food economy. There were raffles, samples, snacks, a lot of laughter, and only a little bit of rain. Learn more about the day’s events here. 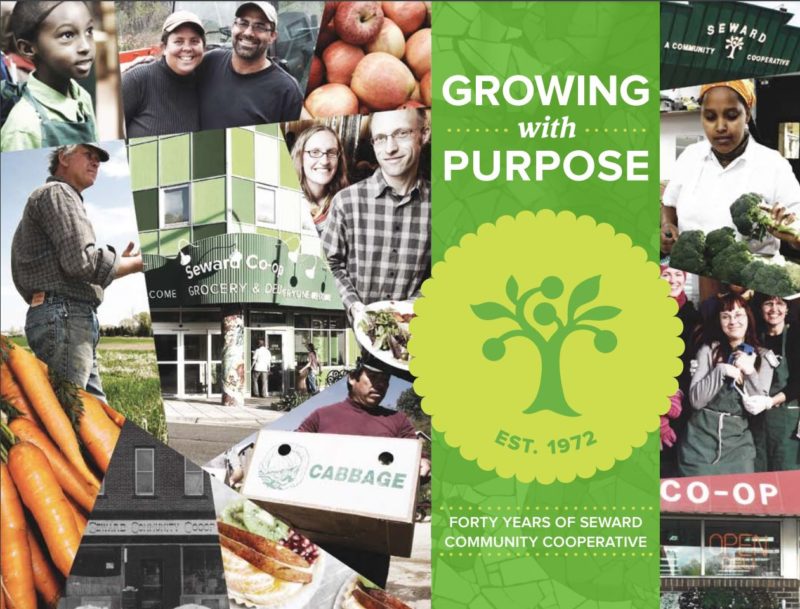 Growing on Purpose was written by Kari Cornell and Patricia Cumbie to commemorate Seward Co-op’s 40th Anniversary. This book is dedicated to past, present and future Seward Co-op owners. The story takes a deep dive into Seward Co-op’s history connecting readers with the real people behind our co-op.