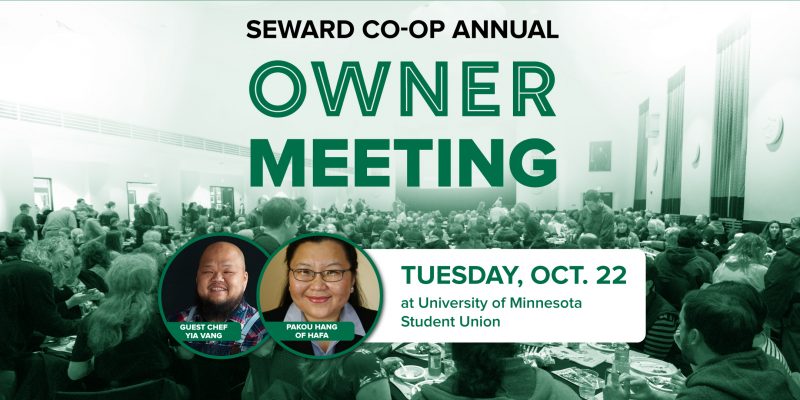 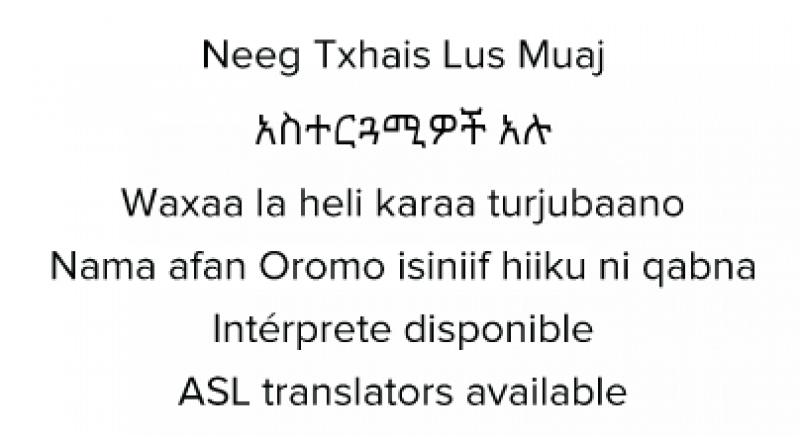 Join us on Tuesday, Oct. 22, at the Annual Co-op Owner Meeting as we recognize and understand the vital role of Hmong American farmers and Hmong culture in our local food system. Share a meal full of Hmong flavors designed by Chef Yia Vang and learn how Hmong American farmers are organizing to access land, markets, capital, research and training so that they can build intergenerational and community wealth. Our featured speaker is Pakou Hang, Co-Founder and Executive Director of the Hmong American Farmers Association (HAFA), a membership based non-profit organization that was created in 2011 to lift up Hmong American farmers and their families. Enjoy music from our musical guest local spoken word poet, mentor, hip hop recording artist and community organizer, Tou SaiKo Lee.

We will also share the results of the board of directors election, and announce SEED recipients for 2020, including the results of our second Community Choice SEED vote!

Pakou Hang is a co-founder and the executive director of the Hmong American Farmers Association (HAFA), a membership based nonprofit organization that was created in 2011 to lift up Hmong American farmers and their families. The organization’s mission is to advance the economic prosperity of Hmong farmers through advocacy, capacity building, and cooperative enterprises. More specifically, HAFA uses an organizing approach to work with its members and their family members to access land, markets, capital, research and training so that they can build intergenerational and community wealth.
Pakou has also worked for over 15 years as a community organizer first as the campaign manager for State Senator Mee Moua’s inaugural special election, then as deputy political director for U.S. Senator Paul Wellstone’s last senate campaign. Pakou has also served as the Minnesota field director for America Votes and deputy vice president for the Children’s Defense Fund in Washington D.C.

Yia Vang was born in a refugee camp in Thailand and his father and mother moved their family to the US in 1988. He is co-founder of Union Hmong Kitchen, a Twin Cities-based Hmong restaurant with a residency at Sociable Cider Werks. He is passionate about making the food he grew up with more accessible to non-Hmongs, while also passing traditions down to the next generation of Hmong Americans.

While working in some of the foremost kitchens of Minneapolis, he began to find his own voice in showcasing Hmong food. His belief is that Hmong food isn’t a type of food but it’s a philosophy of food. Hmong food is not defined by its product. It’s defined by its process. He believes that the melding of many cultures plays a role in the cultural DNA of the Hmong people. “Our history is intrinsically woven into the food we eat,” he says. “Every dish has a narrative, and if you follow that narrative closely enough, you understand the people.” Yia also brings flavor, fire, and a passion for storytelling through food.

Board of Directors Election

Help maintain our healthy co-op democracy and participate in the direction we take as a community-owned business by casting your vote. The election commences on Tuesday, Oct. 1. There are four at-large seats open. Three are three-year terms and the fourth seat is a one-year term. The candidate who receives the fourth highest number of votes will serve the one-year term. There is one designated employee director seat open for a one-year term, fulfilling the final year of a vacated seat. Current employees of Seward Co-op are eligible to run for the designated employee director seat. Employees are ineligible to run for an at-large seat this year. This is because Seward Co-op bylaws restrict the number of employees on the board to two, and one at-large employee director is currently mid-term.

Paper ballots will be accepted at any co-op location or can be mailed. Voting is open through the annual meeting on Tuesday, Oct. 22, when election results will be announced. Click here for more information about the election, or email board@seward.coop.

The SEED program is a simple yet powerful community giving opportunity that allows customers to “round-up” their grocery bill for recipient organizations that share our commitment to a healthy community. Along with our community’s efforts the SEED program raises over $250,000 for local non-profits!

Each year, a staff led committee selects the recipients for the coming year. Co-op owners are invited to vote for four Community Choice recipients. Voting for community Choice SEED recipients is open from Oct. 1-14. Final selections are announced at the Annual Owner Meeting.

Getting to the Annual Owner Meeting

Bus or light rail and other options are relevant public transportation alternatives that may be used to reach your destination. The following transit lines have routes that pass near the student union: Light rail – Green; Bus – 2, 3, 6.

University of Minnesota student union is right off East River Parkway which is connected to many bike trails.

Short-term and disability parking is available for the student union with an attached entrance to the south side of the building easily accessible from East River Parkway.

Interpreting services will be available during the Annual Owner Meeting for American Sign Language, Spanish, Oromo, Amharic, Hmong, and Somali.