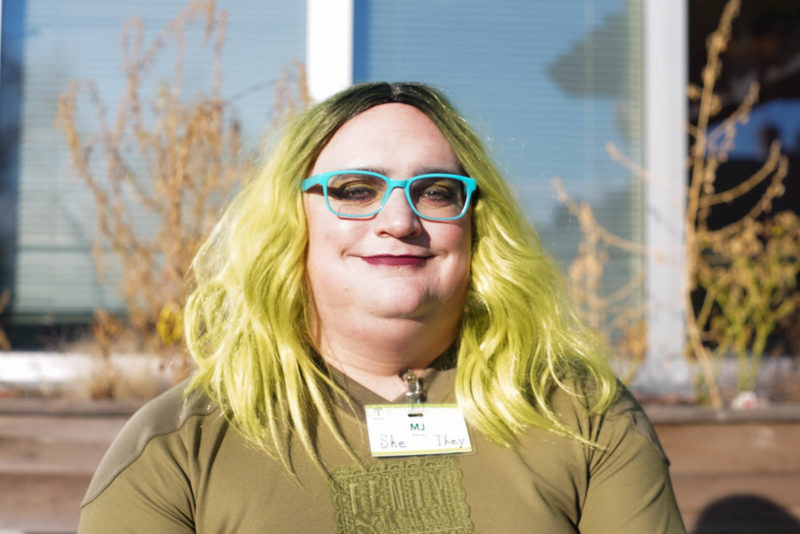 “Trans woman.” “Non-binary.” “Genderfluid.” Different labels for different audiences—and for whether I feel like explaining what the words mean or not. Personally, I’ve been feeling much more aligned with non-binary lately, as the box of societal femininity is stifling and a lot of damn work. I think that’s something to which many people can relate, whether cisgender (aligning with the gender one is assigned at birth) or transgender.

For most people, their assigned gender, their gender presentation, and their gender identity align. It can be difficult for some community members to understand the dissonance and dysphoria for those of us who have worked to actualize our gender identity. Repression can firmly hold that closet door shut, and for many of us, we not only dismissed who we are, we forgot. The mask of gender became automatic, though not authentic.

Identity has many aspects, but in a society that places so much weight on gender, gender is a very important one. Using correct pronouns honors a person’s identity, and creates a more inclusive and affirming environment. Using gender-neutral pronouns for community members whom we don’t have gender identifying information is important. While it can be easy to base pronoun usage on how somebody looks, gender presentation can be difficult and stifling. Sometimes, I don’t have the energy to signify my gender.

Being referred to by a pronoun that doesn’t honor one’s identity can result in a mere mental acknowledgment, or it can ruin someone’s day. You never know if they’re going through a rough time, or if they carry trauma or negativity around their assigned gender at birth. If someone is really trying hard to “pass,” the wrong pronoun can make living authentically feel hopeless.

Singular they (and its gender-neutral counterparts them, their, and theirs) can be used for the pronoun of someone whose gender is unknown, irrelevant, concealed, or non-binary. Some people say that they have a hard time with the concept of singular “they.” However, singular they is not new. The Oxford English Dictionary records its first use in 1375, where it was used to refer to an unknown person. This is the use most people are first familiar with. For example, if someone says “my homie shares the spiciest memes,” it’s not unusual to say “can you give me their Instagram?” It wasn’t until the 18th century that grammarians forgot “they” could be singular or plural.

Conscientious pronoun usage not only sends a message about the speaker’s knowledge of gender, it indicates that they are cognizant and affirming of those of us who struggle to fit their complex experience of gender in the constraints of colonization and a simplistic and inaccurate model of reality. Words hold power, and power should be used to liberate and empower the marginalized.