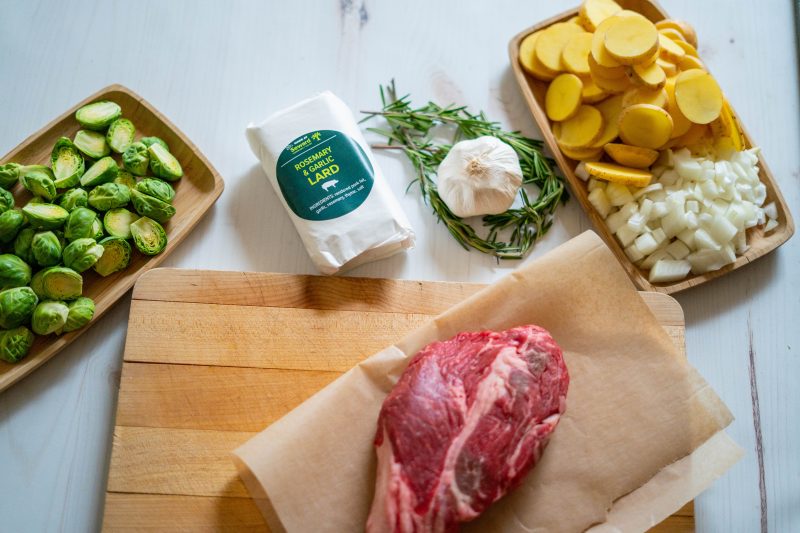 Hunker down with a twist on a classic steak and potatoes recipe. Made with simple, quality ingredients that you can find at the co-op. Featuring ingredients from Community Foods producers like Blooming Prairie and Seward Co-op, so you can feel good about the meal at the table!

Blooming Prairie is a local, small-scale Community Foods farm, providing beef and halal goat at the Franklin and Friendship stores. Owner Paul Smith and his son Jared are committed to raising their cows naturally with a grain finish to provide high-quality beef with great flavor. With their nearby processing facility in the city of Geneva, Blooming Prairie has complete control over the quality of beef that is available in our meat case.

Heat a pan over high heat. Tenderize steak and generously season on both sides with pepper and salt. Heat the lard in the preheated skillet, add steak and cook for 3 minutes. Turn, and cook on other side undisturbed, 3–4 minutes, spooning the lard over the steak while it cooks the last 2 minutes. Set aside the steak allowing it to rest.

Slice potatoes into coins about ¼-inch thick. In the same pan used for the steak, heat up 1 Tbsp. of the lard then add potatoes and season with salt and pepper. Cook, undisturbed, until potatoes are golden and crusty underneath, 4–5 minutes. Flip potatoes and add the Brussels sprouts and onions. Cook about 6 minutes while stirring often until Brussels sprouts are tender, onions are lightly browned, and potatoes are golden. Slice steak against the grain, plating with the veggies. Enjoy!